The Native American Heritage Trail exists to provide accurate information about the Indigenous people of the region, and to enable visitors to explore the Housatonic River Valley while viewing it through a Native American prism. 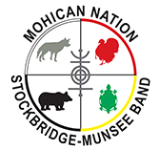 It is with gratitude and humility that we acknowledge that we are learning, speaking and gathering on the ancestral homelands of the Mohican people, who are the indigenous peoples of this land. Despite tremendous hardship in being forced from here, today their community resides in Wisconsin and is known as the Stockbridge-Munsee Community. We pay honor and respect to their ancestors past and present as we commit to building a more inclusive and equitable space for all.”