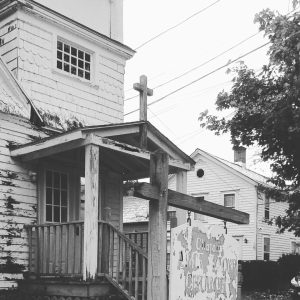 Dedicated in 1887, the Clinton A.M.E. Zion Church in Great Barrington, Massachusetts, served as the spiritual, cultural and political home for the local African American community for nearly 130 years. It was also a place of significance for author and civil rights leader W.E.B. Du Bois, who was born and raised in Great Barrington.

This unique landmark is a prominent site on the Upper Housatonic Valley African American Heritage Trail.

Urgently needed action is currently underway to save the building, which has been out of use for several years and is in severe disrepair.

In November 2016 about 25 people from the community gathered to discuss options for purchasing, restoring, and preserving the history and legacy of Clinton A.M.E. Zion Church in Great Barrington. Present were elected officials, members of the former congregation, local historians, activists, preservationists, civil rights scholars, W.E.B. Dubois scholars, and concerned citizens.

All share a love for the church building, and a desire to see it preserved. This was a strategy meeting, and did not include “programming” or discussions on the ultimate use, as there was urgency to acquire the property and implement some stop gap measures to prevent further damage from the leaking roof.

A solution for the purchase of the church was proposed, which included creating a new nonprofit organization to hold title to the building (at least through the acquisition / restoration phases), plus partnering with Housatonic Heritage, which provided fiscal sponsorship.

The ‘Clinton Church Restoration’ organization was formed in late 2016 by a group of local community members concerned about the fate of the de-consecrated church. Now a 501(c)(3), the organization’s goal is to preserve and re-purpose the historic property as a vital, self-sustaining entity for community use that celebrates and honors the local African American community, the church’s 130-year history and its first female pastor, Rev. Esther Dozier, and the legacy of Great Barrington’s most famous native son, W.E.B. Du Bois.

Housatonic Heritage is proud to be an ongoing partner in this important effort, which is part of a growing movement to preserve African American historic places around the country. Learn more about this exciting project at www.clintonchurchrestoration.org.